Only 40 days until we draw the winner to the Ultimate Tank Driving Experience Sweepstakes, including an opportunity to drive the ultra-rare M26 Pershing! We will draw on March 31st - Have you purchased your tickets yet? This fundraiser helps support the growth of the American Heritage Museum and create new programs at the museum for visitors and students and could be the experience of a lifetime for you!! Get 30% more bonus tickets by following this link to get your tickets! americanheritagemuseum.tapkat.org/iconsofarmor?promo=FB202102 ...

The American Heritage Museum’s very own tank driving grounds, not far from the birthplace of America in Boston, Massachusetts, will be the site of this extraordinary prize! Our new, world-class museum in Hudson, Massachusetts is home to over 95 tanks, military vehicles, and rare artifacts. The win...

Updates to the 3-D interior panorama of the TP-40N Warhawk! Thanks John. See link: americanaeroservices.com/P-40Ngrphc2.html# ...

As you make plans for your #GivingTuesday donations on Facebook, please consider supporting the living history mission of the Collings Foundation and American Heritage Museum! Though 2020 has been a challenge for our nation, we have accomplished so much because of supporters like you... and we hope you can help us to do even more in 2021. You can click on the Facebook campaign at: www.facebook.com/donate/888972571932577/ , or make a direct gift at: www.collingsfoundation.org/giving/annual-fund/ - thank you in advance for your support! ...

Good morning everyone! Hope all of you had a nice Turkey day. We just added a bunch of nice Cobi building block models to our online store, among other neat items. The revenue generated from store sales help us in a big way. Hope you will pick something nice for the holidays while supporting the Collings Foundation and American Heritage Museum. When shopping add discount code "Holiday2020" to save 10% on your purchase.
Link to the store: www.collingsfoundation.org/shop/
From all of us at the American Heritage Museum and Collings Foundation - Happy and Healthy Holidays! ... 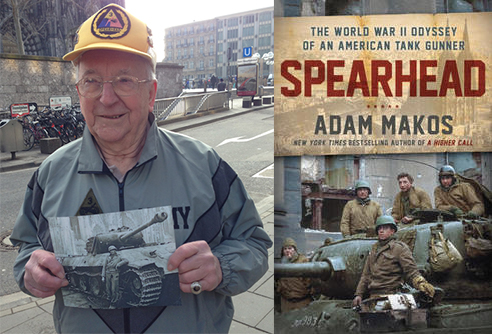 In his new book, “Spearhead: The World War II Odyssey of an American Tank Gunner“, Adam Makos (the New York Times bestselling author of “A Higher Call”) chronicles the trek of American tank gunner Clarence Smoyer, driving with his compatriots in the 3rd Armored Division into the heart of Germany.

Please join Clarence Smoyer with Adam Makos for an afternoon lecture and discussion at the new American Heritage Museum on Sunday, December 2nd, 2018 starting at 12:00 PM for a personal discussion of his personal experiences in the 3rd Armored Division in the closing days of World War II. Admission to the lecture and the American Heritage Museum is $20 Adults, $18 for Seniors & Veterans, and $10 for Children Under 12. The AHM will be open from 10am to 5pm that day.

>> Purchase Tickets for the Event at this Link << From the New York Times bestselling author of A Higher Call comes the riveting World War II story of an American tank gunner’s journey into the heart of the Third Reich, where he will meet destiny in an iconic armor duel—and forge an enduring bond with his enemy.

When Clarence Smoyer is assigned to the gunner’s seat of his Sherman tank, his crewmates discover that the gentle giant from Pennsylvania has a hidden talent: He’s a natural-born shooter.

At first, Clarence and his fellow crews in the legendary 3rd Armored Division—“Spearhead”—thought their tanks were invincible. Then they met the German Panther, with a gun so murderous it could shoot through one Sherman and into the next. Soon a pattern emerged: The lead tank always gets hit.

After Clarence sees his friends cut down breaching the West Wall and holding the line in the Battle of the Bulge, he and his crew are given a weapon with the power to avenge their fallen brothers: the Pershing, a state-of-the-art “super tank,” one of twenty in the European theater.

But with it comes a harrowing new responsibility: Now they will spearhead every attack. That’s how Clarence, the corporal from coal country, finds himself leading the U.S. Army into its largest urban battle of the European war, the fight for Cologne, the “Fortress City” of Germany.

Battling through the ruins, Clarence will engage the fearsome Panther in a duel immortalized by an army cameraman. And he will square off with Gustav Schaefer, a teenager behind the trigger in a Panzer IV tank, whose crew has been sent on a suicide mission to stop the Americans.

As Clarence and Gustav trade fire down a long boulevard, they are taken by surprise by a tragic mistake of war. What happens next will haunt Clarence to the modern day, drawing him back to Cologne to do the unthinkable: to face his enemy, one last time.

>> Purchase Tickets for the Event at this Link <<