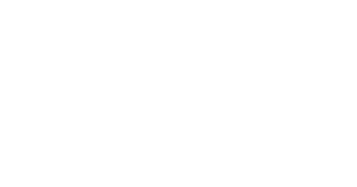 The adventurous romance of flying was in full swing during the early 1900s. A number of key figures refining and defining the modern aeroplane. This kicked off the great Pioneer Era (1903 - 1914) of aeroplane development and design. 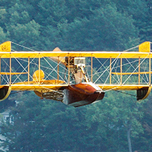 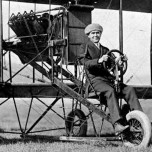 The elaborately constructed Curtiss Pusher captured the imagination of people worldwide. Unique design features of the bi-plane include positioning the propeller and revolutionary Curtiss OX-5 engine behind the pilot were revolutionary designs at the time.

The Wright "Vin Fiz" won acclaim with Calbrath Perry Rodgers at the controls as being the first aircraft to cross the American continent.

The Bleriot XI was a later incarnation of the famed Bleriot flown by Louis Bleriot on July 25, 1909 across the English Channel and made him the first to do such a feat.

During World War II, aviation firmly established itself as a critical component of modern warfare. Military investment during WWII accelerated aviation design considerably. The Collings Foundation has recovered and restored many of the true landmark aircraft that built the world aviation history. 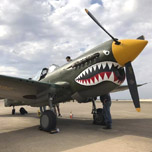 This PBY was the United States’ highest scoring U-boat destroyer in history, and is the oldest operational Catalina.

The Grumman Hellcat was the most successful and important Navy fighter in the Pacific Theater. The fighter had a 19 to 1 kill to loss ratio, making it the highest scoring Navy aircraft of all time.

The Lightning played one of the most significant operations in the Pacific theater: the interception, on 18 April 1943, of Admiral Isoroku Yamamoto, the architect of Japan's naval strategy in the Pacific including the attack on Pearl Harbor.

The last fully restored and flying PT-17 Stearman used by the Tuskegee Airmen.

The Collings Foundation is pleased to announce the addition one of the world's most significant Spitfire restorations.

The newest addition to the Foundation's historic fighter aircraft. TF-51D Mustang "Toulouse Nuts" received the recognition as Grand Champion at the 2016 Oshkosh AirVenture.

One of the Collings Foundation's "prettiest" planes. Beautifully restored from nose to tail.

Willy Messerschmitt introduced the world to a whole new concept of cutting edge technology through the development of the first operational jet fighter, the ME-262.

The Collings Foundation is pleased to announce the addition of the world’s only dual control P-51C Mustang to our WWII aircraft collection.

The world's only flying B-24J continues soaring through its native skies as part of the annual Wings of Freedom Tour with its sister ship, the B-17 Flying Fortress.

Made famous in its role in the Daylight Strategic Bombing Campaign of WWII and the post-war movies that made it an icon, the B-17 flew proudly across the United States with its companion.

The Collings Foundation's T-33 Shooting Star based in Houston, TX is being restored back to pristine condition just as it would have looked in its service in the 1950's and 1960's.

The T-33 Shooting Star owned by the Collings Foundation and on static display in Stow, MA is one of two. T-33. The other example is a flying T-33 based in Houston, TX and operated by CFW.

Definitely one of the most distinctive designs ever employed by a fighter aircraft, the Vought F4U-5NL Corsair lives as one of the most famous fighters built during WWII.

The North American AT-6 Texan won wide acclaim as one of the most well used advanced trainers not only during WWII but also beyond.

The Collings Foudnation's Vietnam Memorial aircraft fly in tribute to those who served and fought for the freedoms of the Vietnamese people. Based in Houston, Texas, these aircraft are fully restored and flying.

The North American F-100 Super Sabre is a swept wing supersonic jet fighter that served with the US Air Force from 1954 to 1971 and the Air National Guard until 1979.

The Collings Foundation is proud to honor the memory of all Vietnam Veterans by returning the Playboy colors to the sky.

One of the most versatile aircraft in former US Navy inventory, the Grumman S-2F Tracker was known and loved by a generation of pilots that flew it.

The UH-1 initially saw combat in Vietnam where its use as an infantry transport craft into the dense jungles made its type famous on television in some of the first news broadcasts from the battlefields. 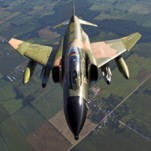 One of the most important military aircraft in the history of the United States. Due to the performance of the aircraft, the Navy, Air Force, and Marine Corps all utilized the F-4.

A true David and Goliath story -- a Grasshopper credited with six German tank kills, including two legendary Tiger tanks, in a role for which it was never intended. Survived for years under the cover of a nameless civilian aircraft. Now being restored to its original configuration.

The B-17 was primarily used by the USAAF in the daylight strategic bombing campaigns of World War II. The Evergreen B-17 has an interesting post WWII history.

The last known remaining Fairchild PT-19A used for primary flight training by the Tuskegee Airmen in 1944 is currently under restoration to flight by the Collings Foundation.

Our A-26 Invader, under restoration in Uvalde, TX, will be one of the few of its type to wear its original markings as "My Mary Lou" an A-26 that fought in Korea from 1953-56.