Home / The Foundation / Mission and Purpose

As 2022 comes to a close, we are excited to present our 2022 Annual Magazine for your reading pleasure - full of news from the past year on the activities of the Collings Foundation and the American Heritage Museum. Please read it online at the link below! ... See MoreSee Less

Just a reminder, Friday, December 16th is the last day to order any items from our online gift shop to make it to you before December 25th! Shop our online store today! ... See MoreSee Less

Last order day to get items by Christmas is December 16th. Wonderful variety of gifts and items for your aviation and history enthusiast. Proceeds go to the American Heritage Museum and Collings Found...
View on Facebook
· Share

Major progress taking place on the Hanoi Hilton POW Experience Exhibit at the American Heritage Museum in Hudson, MA (a program of the Collings Foundation). Some of the significant design elements have been installed and the plaster treatment and aging of the original reconstructed cells has been completed, resulting in a very somber and humbling appearance when considering the isolation and torture of the POWs who were kept there for years. We look forward to opening this important exhibit in February to honor our veterans and POWs of the Vietnam War. See more photos and learn more at ... See MoreSee Less

The scenic treatments to transform the Hanoi Hilton Exhibit and the original cells into what it looked like in the late 1960’s is quickly taking shape. Read more about it in this story...
View on Facebook
· Share

We are more than HALF-WAY to our $15,000 Goal for Giving Tuesday to unlock our donor match challenge! Give online, by phone, or by mail today and help us continue our growth by supporting educational programs, new exhibits like the Vietnam POW exhibit, artifact restorations like the B-17, M36 Jackson, and new WWII Japanese Kawanishi N1K1 Kyofu (Rex)! Donate today at www.collingsfoundation.org/giving/annual-fund/ ... See MoreSee Less
View on Facebook
· Share

The nation and the entire Warbird community is stunned and saddened by the shocking loss of two iconic World War II aircraft owned and operated by the Commemorative Air Force (CAF). We join in mourning the CAF crew lost in this tragic accident and offer our heartfelt prayers during this extremely difficult time. ... See MoreSee Less
View on Facebook
· Share

The purpose of the Collings Foundation is to organize and support “living history” events and the presentation of historical artifacts and content that enable Americans to learn more about their heritage through direct participation.

The Collings Foundation is a non-profit, Educational Foundation (501(c)3), founded in 1979. The purpose of the Foundation is to organize and support “living history” events and the preservation, exhibition and interaction of historical artifacts that enable Americans to learn more about their heritage through direct participation. The original focus of the Foundation was transportation-related events such as antique car rallies, hill climbs, carriage and sleigh rides, and a winter ice-cutting festival in the Stow, MA area. During the mid-eighties, these activities were broadened to include aviation-related events such as air shows, barnstorming, historical reunions, and joint museum displays on a nationwide level. 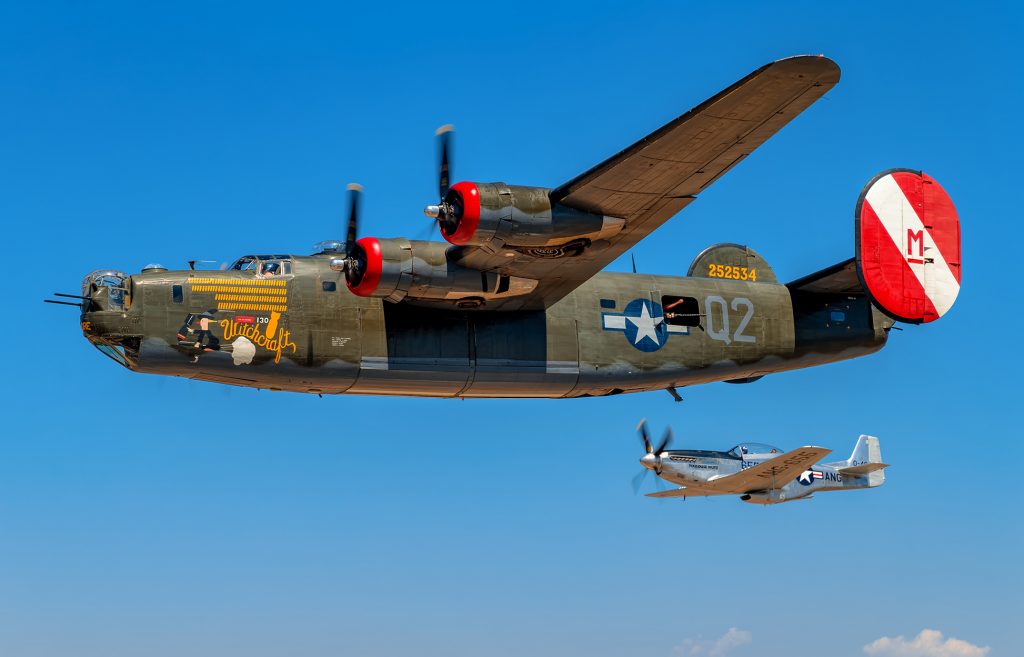 The Foundation’s 1944 vintage Consolidated B-24J Liberator is painted as “Witchcraft”, an 8th AF bomber that flew a record 130 missions over Europe as part of the 467th BG.  Joining the bombers is a P-51D Mustang escort fighter “Toulouse Nuts”. The P-51 was affectionately nicknamed by the bomber crews as their “Little Friends”. The P-51 Mustang and the pilots who flew them saved countless lives in the skies and on the ground, and helped turn the tide of WWII. The P-51 is arguably the finest fighter aircraft in the history of aviation.

The “Wings of Freedom Tour” has two goals: to honor the sacrifices made by our veterans that allow us to enjoy our freedom; and to educate the visitors, especially younger Americans, about our national history and heritage. The Foundation encourages people to tour the planes, talk to the veterans who come to visit the aircraft, and participate in a “flight experience.” Celebrating 31 years, the tour has made more than 3,500 visits to airports across the United States and Alaska. While the exact number of visitors is difficult to gauge, it is estimated that over 3.5 million people see these fully restored historic aircraft annually.

In honor of America’s Vietnam Veterans, the Collings Foundation has developed the “Vietnam Memorial Flight” of the McDonnell F-4D Phantom II, Douglas TA-4J Skyhawk, Bell UH-1E Huey and F-100F Super Sabre. The F-4D Phantom II is the only civilian operated example of the type and has appeared at major US air shows since 1999 in the markings of the aircraft flown by Gen. Robin Olds in Vietnam. In 2005 the F-4 was joined by the Douglas TA-4J Skyhawk that has been painted to represent the markings of H&MS-11 “The Playboys”, a distinguished all-volunteer fast forward air control group operated out of DaNang by USMC MAG-11. The UH-1E Huey, one of the most recognizable symbols of the Vietnam War, operates in the markings it carried while flown in combat by Captain Steven Pless, CMDH, with USMC VMO-6. This combat distinction is rare as many Hueys never returned from the war, much less surviving in the years since. The F-100F Super Sabre is the newest addition to the Vietnam Memorial Flight. This F-100F is painted in the markings of Medal of Honor recipient Bud Day’s favorite MISTY jet. In April 2012, a Douglas A-1E Skyraider has joined the foundation’s collection and will be flying in honor of our Vietnam Veterans. In addition to attending air shows and living history events, we offer unique “flight experience and training” programs in the jets and helicopter. From our headquarters in Stow, MA, the Foundation coordinates the “Wings of Freedom” and “Vietnam Memorial” flights and acts as a clearinghouse of information on issues of both aviation and history, along with overseeing the operation of our other aircraft and “living history” projects.

The Foundation also sponsors on and off-site educational/restoration workshops. In Houston, TX, with the CF West group of volunteers based at Ellington Field help with operations and on-going restoration and maintenance. The F-4D Phantom, TA-4J Skyhawk, F-100 Super Sabre and UH-IE Huey are also maintained there. The New Smyrna Beach, Florida location is responsible for the award-winning restoration of the F4U-5NL Corsair and A-36, as well as the annual and continued maintenance of the B-17, B-24, and B-25. Automobiles, tanks and other equipment are maintained at the Foundation headquarters. These workshops provide the Foundation with valuable services and expertise, and the volunteers and veterans provide countless hours of labor – and enthusiasm.

Over the past thirty years the Foundation has undertaken and completed more restoration projects than many of the major aviation museums in the United States such as the Smithsonian’s National Air and Space Museum (NASM) or the United States Air Force Museum. The importance of volunteers who support the Foundation’s efforts by hosting the aircraft in their towns, maintaining and restoring the planes, educating the American public about the heritage the planes represent, and financially supporting the Foundation’s efforts is invaluable. The Foundation’s efforts have caught the attention of people of all ages and backgrounds (the youngest volunteer started at age 12). The Foundation also relies upon the volunteer services from professional pilots, mechanics, experts, education experts and people of all walks of life. We encourage you to become a Participating Member. For more information click here