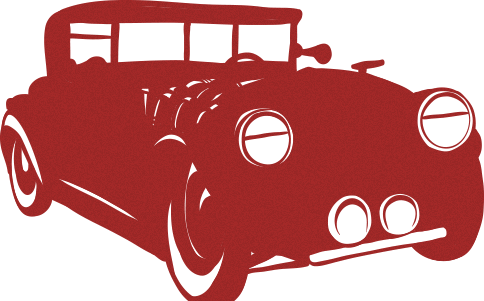 The Collings Foundation has thirteen beautiful automobiles from the Brass Era - the early period of automotive manufacturing, named for the prominent brass fittings used during this time.

This car is a Model R, the first car to bear the name Oldsmobile and the first of 3 models to be known as a Curved Dash Oldsmobile.

This car's frame is ash which is very flexible. The engine is transverse mounted and air cooled.

The Pope Waverly was originally introduced as the Waverley in 1898. It was the only electric car produced by Colonel Albert A. Pope.

This Stanley Model F was restored in the 1970s and driven coast to coast.

The Cadillac Open Roadster is the first automobile with fully interchangeable parts for which it won the Dewar Trophy in 1908.

The Model T was introduced in 1908 with left-hand drive. The car was capable of going 45 mph and needed only a gallon of gasoline every 25 miles.

This car was built by the owner of an original Mercer Speedster who wanted a less valuable version of his car for shows and parades.

The Bearcat is the most memorable model built by Stutz. The name lasted from 1914 through 1934.

This Series H has scored 100-points in judging after restoration and is a Senior National First Prize Winner.

In 1916 Oldsmobile introduced its first production V-8 cylinder engine to the American market with the Model 44.

The first automobile to bear the name Willys-Knight was produced in 1914.

A Marmon Model 34 was driven across the country in less than 6 days.

This Depot Hack has its original wood body that has been restored.

Automobiles such as the 1927 Rolls Royce Springfield and 1932 Duesenberg SJ defined the "Classic" look of an automobile. Smooth curves, intricate hood ornaments and ornate interiors are key futures in these beautiful cars.

The first Rolls Royce to come to the United States since the beginning of WWI arrived on October 4th 1919.

The Twin Six arrived in 1916 as the first 12 cylinder (V-12) car in production anywhere in the world.

This 1928 Packard Phaeton was the first antique car purchased for this collection.

This car is in original condition. You can see the "C" gas ration sticker from the WWII gas shortage on the windshield.

The 1929 Pontiac Cabriolet has a top which folds down with roll down windows and a rumble seat.

The L29 was one of two front wheel drive cars introduced in 1929, the other was a Ruxton.

An electric car designed by Thomas Edison. 20 were built in 1902 and production continued through 1912.

This car is the prototype supercharged Model SJ used by Fred Duesenberg as his personal test car.

This was the first car to have retractable head lights and a semi-automatic shift.

The most notable celebrity car in the Collings Foundation's collection is a 1940 V-16 Cadillac limousine owned by the famous gangster Al Capone.

Started in 1911, the Indianapolis 500 is one of the world's most popular races. Called "The Greatest Spectacle In Racing" the drivers race 200 hard fought laps. Offenhauser and Duesenberg were two of the pioneers that shaped the history of this event.

24-hour and endurance sport races were won by teams who had the fastest and most durable cars with pit crews who could adjust and act at a moments notice. The Foundation's 1996 Rilley & Scott MkIII/Ford was the winner of the 1997 Rolex 24 hours of Daytona.

Where all modern organized sports car racing originated from! Ingenuity and creative thought were used to turn tractor parts and Model T engines into racing machines.

Mechanical refinements were made to make the sprint cars faster and far more dangerous. Sprint race meets were as popular as NFL football is today.

Rare American vehicles such as the 1917 Vim Camp Devens Express and Ford Model T Ambulance are included in this unique collection.

Artifacts, tractors and vehicles from the early days of mechanized farming make up the majority of this unique collection.

Late 1800's the new automobile was quickly replacing the horse and carriage. The Collings Foundation has several classic carriages and sleighs from this time of American history.